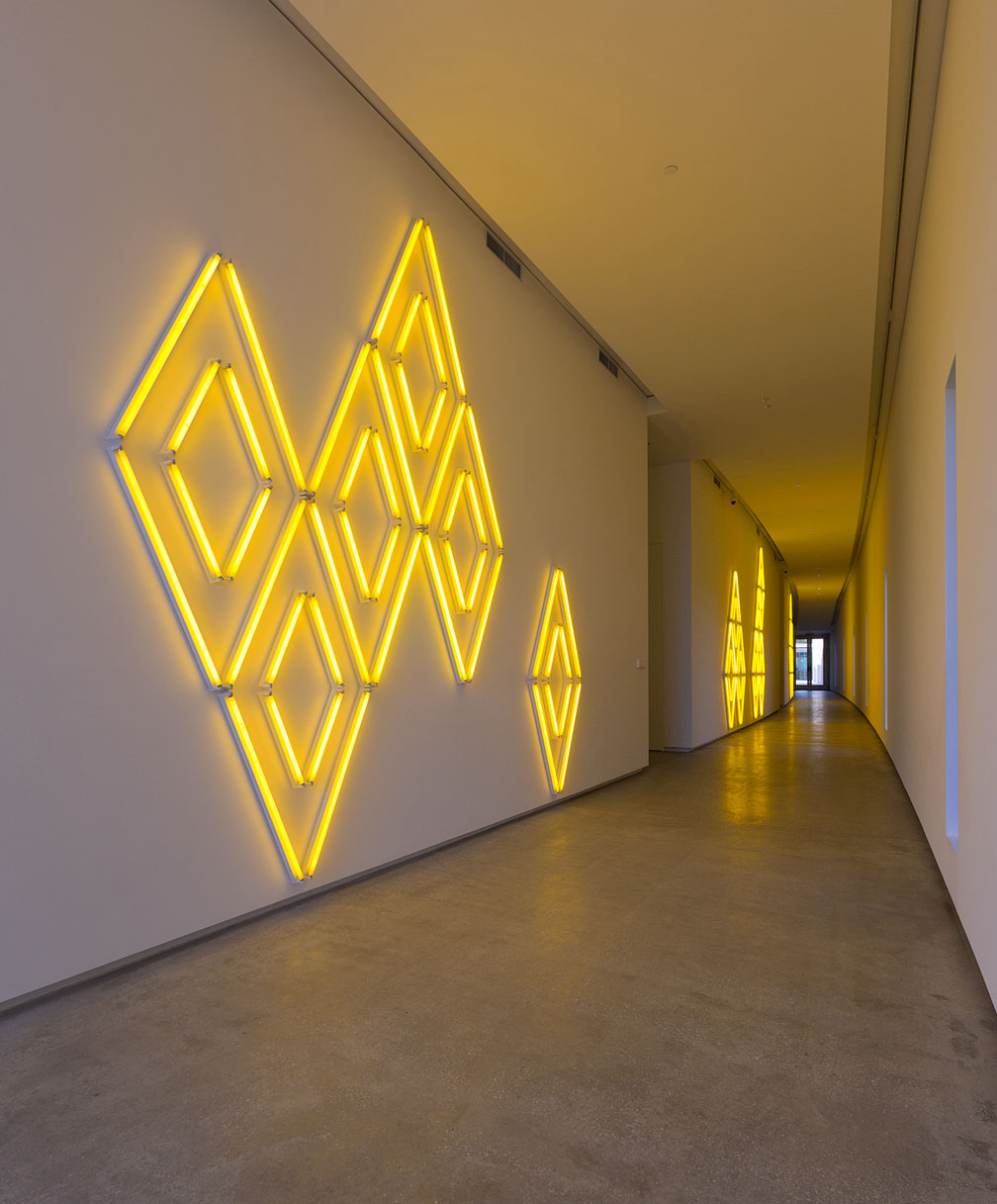 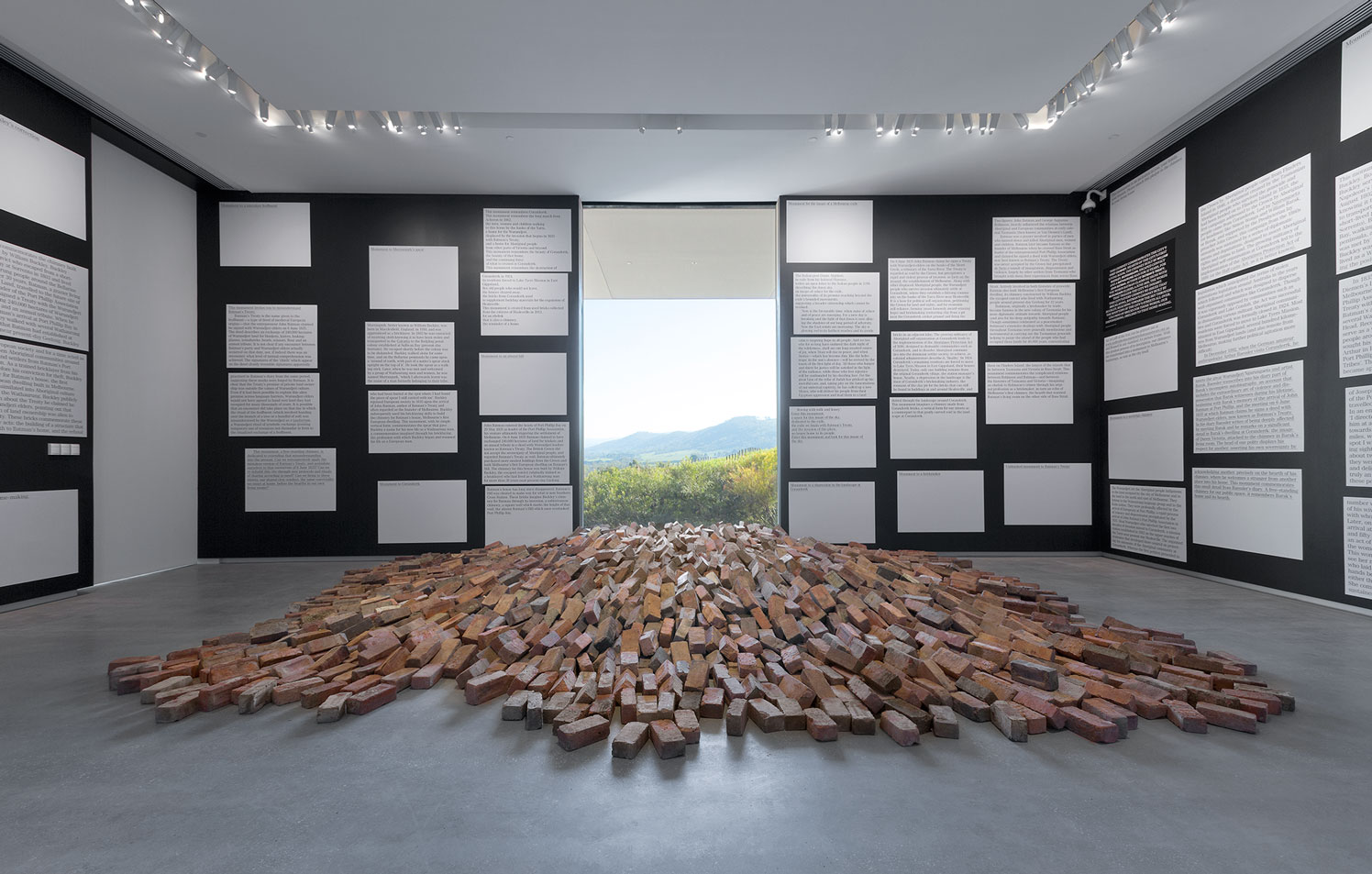 Tom Nicholson
Towards a monument to Batman’s Treaty 2008-2013 (detail)
101 A0 sheets pasted to the museum wall,
3456 used bricks collected by citizens in and around Healesville
Courtesy of the artist and Milani Gallery, Brisbane

Commissioned by the TarraWarra Museum of Art, Future Memorials is the first phase of an ambitious multi-faceted project involving the Sydney-based Wiradjuri-Kamilaroi artist Jonathan Jones, Melbourne-based non-Aboriginal artist Tom Nicholson and Senior Wurundjeri Elder Aunty Joy Wandin Murphy AO. Taking its cue from the proximity of the Museum to the site of Coranderrk Aboriginal Station (located along the Yarra River a few kilometres upstream from the Museum), Future Memorials explores the effects of colonialism and seeks new ways to understand and renew the relationship between these histories and the present.

The exhibition coincides with the 150th anniversary year of Coranderrk which was originally granted to Wurundjeri people, and other dispossessed Victorian Aboriginal people, in 1863. The station became both a thriving and self-sufficient economic community and a powerful base for Aboriginal self-organisation and political advocacy in the late 19th century, most notably through the singular work of the Ngurungaeta (cultural leader) and artist, Beruk, or William Barak.

The large-scale installation untitled (shield design) by Jonathan Jones in consultation with Aunty Joy Wandin Murphy, presents a corridor of yellow light in the Museum’s Vista Walk gallery. The conceptual basis for the design of this work is the wooden parrying shield made by William Barak in 1897 which features a distinctive carved diamond pattern. The colour of the light refers to Barak’s and his father’s prediction of their own death who both stated that they would pass when the muyan (wattle) bloomed. On loan from the Koorie Heritage Trust collection, the shield is displayed as part of the installation. Like a shield, Ngurungaeta (cultural leader) Barak, was steadfast in his campaign for the rights and protection of his people – promoting the strength and legitimacy of his community at Coranderrk – while maintaining their cultural heritage. The use of light also finds a connection in Barak’s paintings of ceremonies, which detail two fires, one for Wurundjeri and the other for guests/visitors.

In 2008 Tom Nicholson began to develop an as yet unrealised public artwork: a monument to Batman’s Treaty. This public monument is to consist of an obelisk-like free-standing chimney covered by an array of different plaques, suggesting different possible meanings for this simple vertical form. It takes as its starting point Melbourne’s first chimney, built for John Batman (1801–1839) by William Buckley (1776–1856). The work draws out the contradictory meanings of the Treaty that Batman claimed he signed with Wurundjeri people in 1835. The installation at TarraWarra Museum of Art, Towards a monument to Batman’s Treaty, comprises the exact number of bricks required to construct the chimney, and the texts for the multiple plaques that would encase it. Like a preparatory drawing, it is a proposition towards the future realisation of the monument: a ‘future memorial’, at the same time suggesting the appearance of its own ruin. The work is part of Nicholson’s ongoing interest in the early history of Melbourne, and in the possibilities of re-animating the form of the monument towards a more complex, even contradictory, articulation of our history. Nicholson’s project has evolved over five years in relation to several important dialogues, with the artist’s partner, the Aboriginal rights solidarity activist Clare Land, with the writer and historian Tony Birch, and with senior Wurundjeri elder Aunty Joy Wandin Murphy.

At the end of the exhibition this installation again becomes part of a dialogue when its physical parts are incorporated into the collaborative work untitled (seven monuments) with Jonathan Jones and Aunty Joy Wandin Murphy. This new public artwork will be installed into the landscape around Healesville to mark the original boundaries of Coranderrk.

This multi-layered project is a meditation on the nature of the monument itself, as a tradition closely linked to colonialism, and on the possibilities of new kinds of public art making or monumentality.