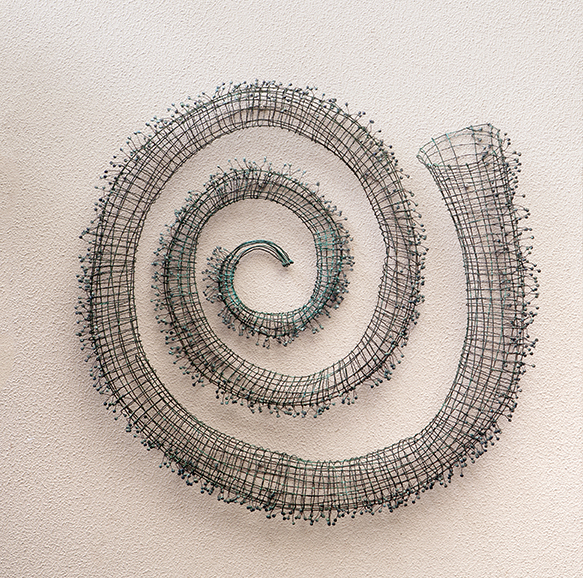 The Sculpture of Bronwyn Oliver

Bronwyn Oliver (1959–2006) was one of the most significant Australian sculptors of recent decades. This first comprehensive survey of 50 key works, from the mid-1980s to the final solo exhibition in 2006, includes early works made in paper, major sculptures from public collections, and maquettes for many of her much-loved public sculptures.

Emerging in the early 1980s when many artists were turning to installation, video and other ephemeral art forms, Oliver resolutely pursued making complex and substantial works in a variety of materials, eventually exclusively in metal. Studying in the UK and working in Europe, Oliver came to artistic maturity at the time of an international resurgence of sculpture; having attained a Masters degree at Chelsea School of Art in 1982–83, she witnessed the nascent years of the ‘New British Sculpture’.

This exhibition reveals Bronwyn Oliver’s lyrical sensibility and inventiveness. She developed an original, distinctive and enduring vocabulary that expressed her fascination with the inner life and language of form, and she tenaciously followed the beguiling demands of her chosen materials.

‘My work is about structure and order. It is a pursuit of a kind of logic: a formal, sculptural logic and poetic logic. It is a conceptual and physical process of building and taking away at the same time. I set out to strip the ideas and associations down to (physically and metaphorically) just the bones, exposing the life still held inside.’

Oliver brought poetic brevity and decision to her sculpture. Many works suggest aspects of the natural world and its metaphorical potential, and a number of the public works are located in gardens. Yet works such as Home of a Curling Bird and Eddy evoke associations with shelter or natural movement or, as with Curlicue, conjure human mark-making with studied panache. Oliver’s work encompasses what appear to be archetypal forms, like shells, spirals, circles, and spheres; their delicate shapes trace shadows that become spectral drawings on the gallery wall, multiplying the physicality of the works.

Between 1986 and her death in 2006, Oliver presented 18 solo exhibitions and from 1983 participated in numerous group exhibitions in Australia and in Japan, the United Kingdom, France, Spain, Germany, New Zealand, Korea and China. At the same time, she undertook many commissions where she worked closely with clients and stakeholders, and for 19 years taught art to primary school students at Sydney’s Cranbrook School. Prodigiously hardworking, Oliver devised exquisite sculptures for the public domain, in locations as various as the Royal Botanic Gardens, Hilton Hotel and Quay Restaurant in inner-city Sydney, and at the University of New South Wales, as well as in Brisbane, Adelaide and Orange in regional NSW. Her work is held in most major Australian public collections, and in numerous collections in New Zealand, the United Kingdom, Europe and the USA.

As writer Hannah Fink memorably observed in 2006, ‘Bronwyn Oliver had that rarest of all skills: she knew how to create beauty.’ This exhibition is a tribute to that power.