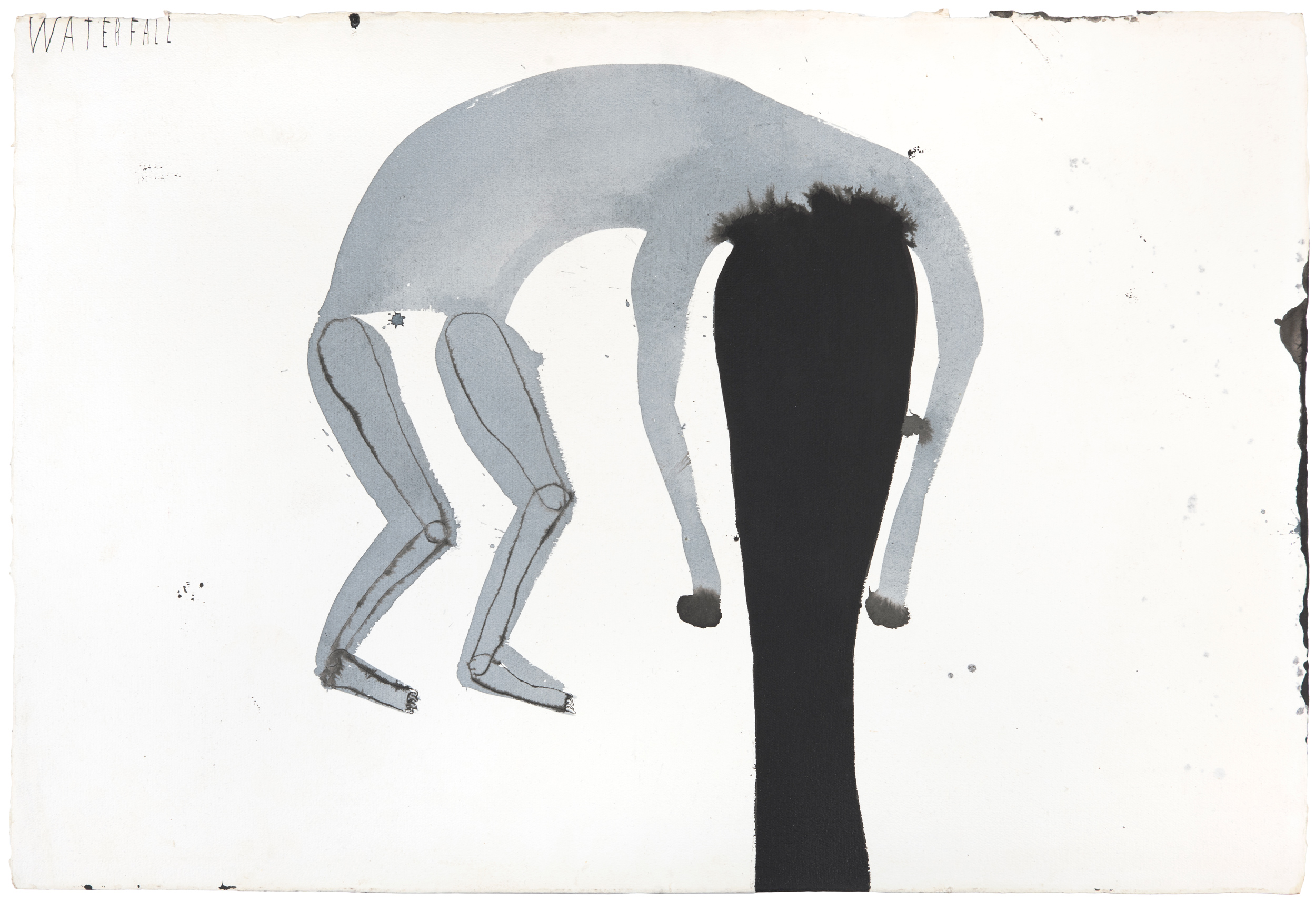 Heather B. Swann:
Leda and the Swan

Heather B. Swann: Leda and the Swan is an exhibition of new sculptures and paintings by contemporary artist Heather B. Swann, who is renowned for her large-scale, meticulously crafted and highly expressive sculptural forms.

Swann’s new installation at TarraWarra Museum of Art is a dream-like work, woven out of her own contemporary reading of the myth of Leda and the Swan and emerging from artist residencies in Rome and Athens. The artist’s close study of Graeco-Roman antiquities and emulation of the forms of classical figurative sculpture is embodied in her use of fragmentation, repetition and mismatched scale.

Taking its name from the story of Leda and the Swan, the work invites audiences to explore the actions, emotions and social-moral codes of this ancient, ambiguous and chilling narrative. At the same time, the work recognises and salutes the historical achievement (and presence in the adjacent gallery spaces) of Sidney Nolan, Australia’s great modernist myth-maker.

Heather B. Swann’s work resonates with the stories and symbols, forms and materials of the past. This is the direct result of a rich experience of and delight in historical museum-culture, art and artefacts. At the same time, her work responds to intimate sensations, emotions and contemplation while also being attuned to the crises of our troubled times. Her project is to translate these fleeting experiences and observations into form, into sculpture and painting.

This new work is conceived as an installation, a singular spatial construct in which the arrangement of forms shapes the empty air of a room, creating delicate and invisible pressure. This tension frames Swann’s contemporary reading of the ancient myth of Leda and the Swan. Enriched by the recent experiences of residencies in Rome and Athens and informed by close observation of Archaic and Classical antiquities, she retells the story through a grammar of fragmentation, repetition and mismatched scale.

The artist creates a place of stillness with room for reflection. Reimagining the Leda story in three configurations, she reaffirms the fundamental enigma of myth as well as its cumulative cultural layers and variations. Swann explores the actions, emotions and social-moral codes of this ancient, ambiguous and chilling narrative, and more broadly the fraught coexistence of chaos and order, barbarity and civilisation. From Leda’s predicament Swann distils an encounter and a language of force and resistance: tooth and nail. 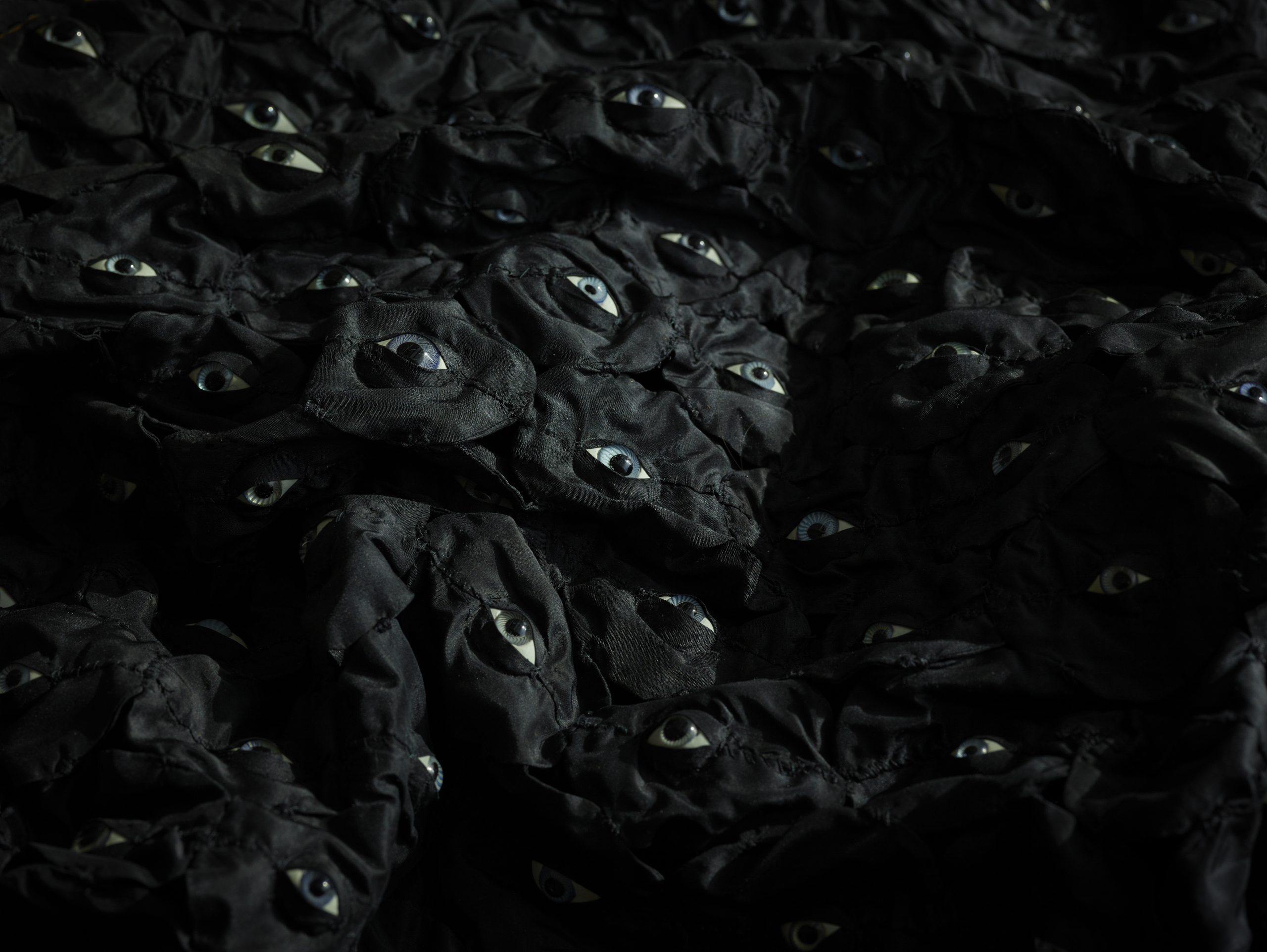 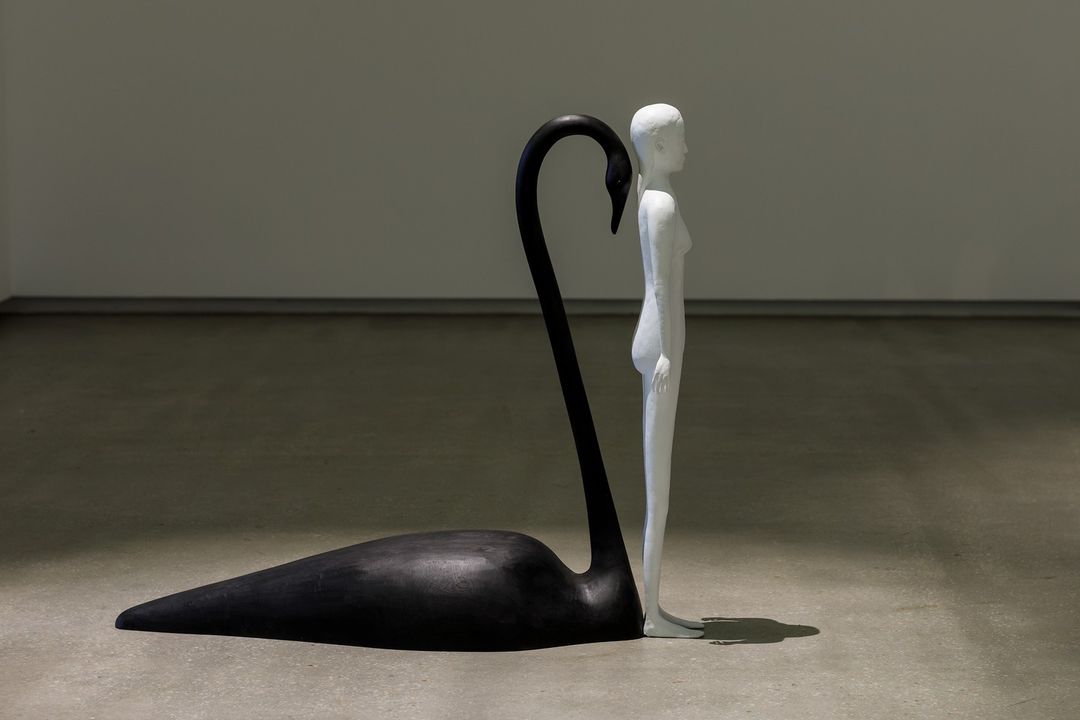 Heather B. Swann, Leda and the Swan 2021 installation view, TarraWarra Museum of Art, 2021. Courtesy of the artist and STATION, Melbourne and Sydney. Photo by Andrew Curtis. 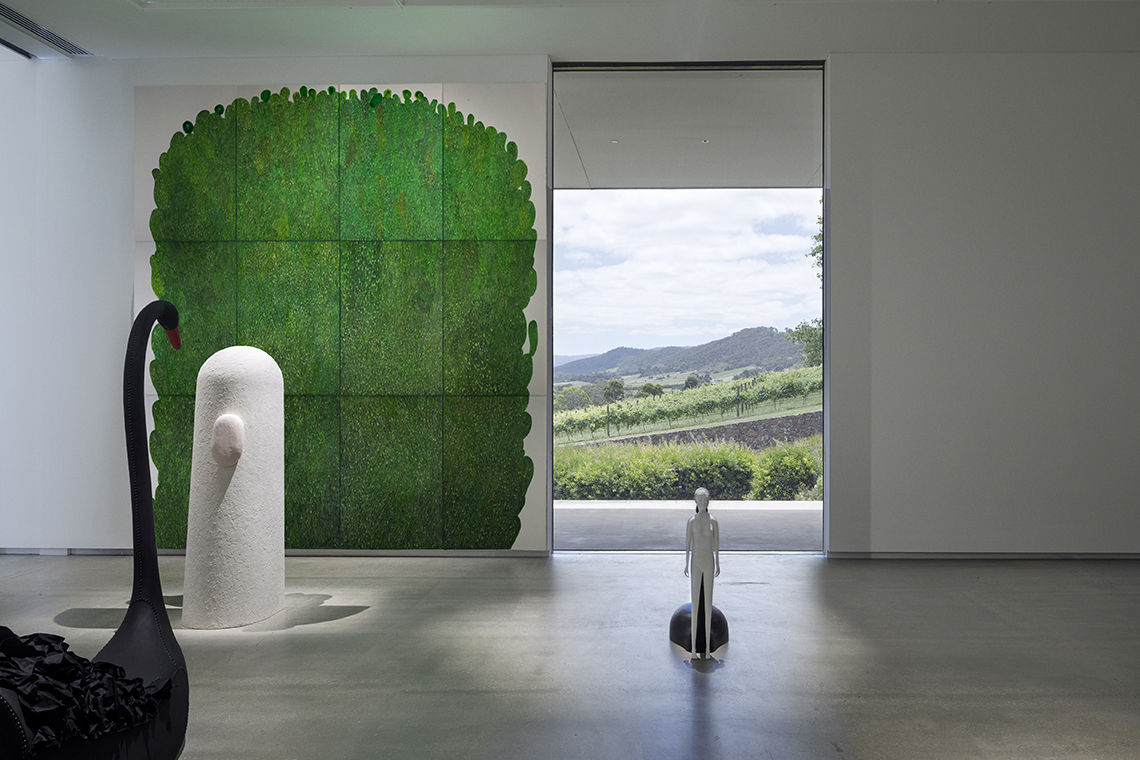 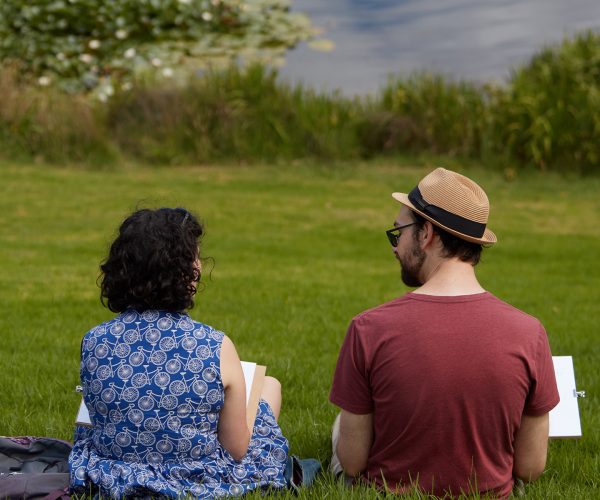 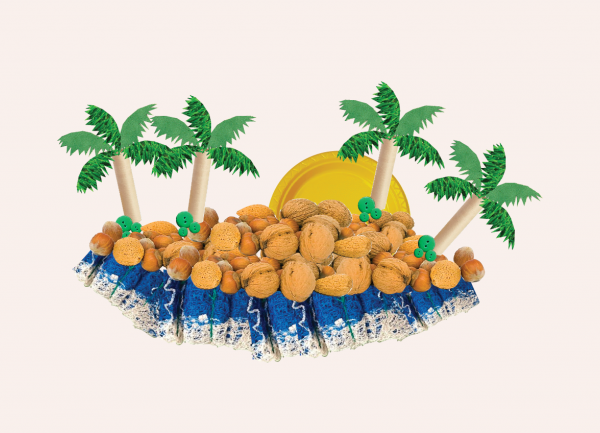 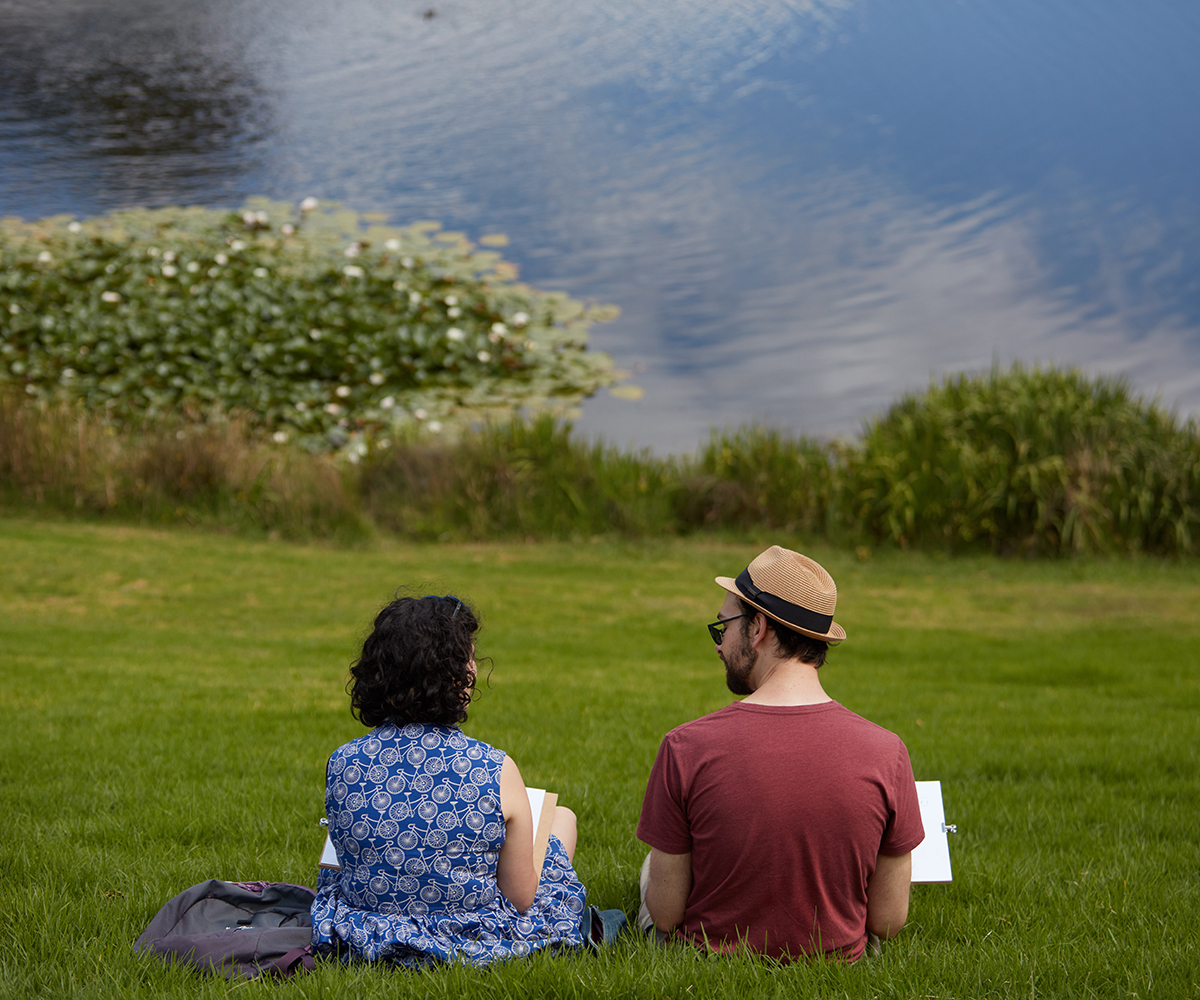 Over almost 30 years of making and exhibiting, Heather B. Swann has accrued a reputation as an artist of obscurity, darkness, blackness.

Originally trained as a printmaker, the fundamental graphic contrasts of intaglio media have always shadowed her work: the burred line, the silhouette, the blot. She now works in Indian ink drawings and in varieties of sculpture, including a rich repertoire of performance tools. Her figures, beasts and uncanny constructions are carved, turned, wrought, cast, modelled and sewn, in polished, pigmented and patinated wood and iron and bronze, in sensual, lustrous leather and silk. Regardless of their materials, Swann’s forms are forthrightly declared by their profiles: without compromise, without tonal excuses.

They come from the night, these images, from that place Borges called ‘the interval of shadow dividing the two twilights’; from dreams and from insomnia. They take the form or suggest the contours not only of love-making, but also of nocturnal fears, of pillow-sorrow, sometimes of sheer, wretched, ceiling-staring 21st century despair.

Consistently drawing on the rich traditions of (mostly) European culture, on mythologies and iconographies from the ancient to the postmodern, on the delights and disturbances of museum art and artefacts, Swann teases the viewer with strange, distorted echoes of the familiar, the half-remembered and the unknown. Nothing in her work is clear or singular or didactic or instrumental. The politics of her practice do not lie in the declaration of a singular position. Rather, the work offers itself as an enigmatic invitation, a prompt to think about the confounding mysteries of the human condition. Like poetry, as poetry, it employs pre-conscious, material-sensual signals to seduce us into receptiveness, into an openness through which we can forge our own meanings and responses.

Commissioned by the TarraWarra Museum of Art to make an exhibition on the theme of Leda and the swan, the artist visited Athens and made a close study of Archaic korai, the marble girls who stand straight and still and self-contained; her installation centres on three Leda/kore figures. Not avoiding or evading the fact that the Greek myth is essentially a rape story, she uses the architecture of the gallery to imply force spatially. She presents female resistance through words and objects that embody the idea of “Tooth and Nail” which speaks of Fight. This new work maintains the artist’s characteristic rich ambiguity, though with the clear injunction to ‘always be on your guard, to fight tooth and nail and to look out for each other. Do not shut up; keep telling the story again and again, and look for change.’

The Story Visit
Open seven days until the end of January, 11am - 5pm.Book your tickets
+